From the Putnam exam to research in conics, the readability of proofs and more, Cal Poly math majors increased their mathematical skills, excelled against some tough competition and created new mathematical knowledge doing research.

The best individual scores were:

Congratulations to our team and all of the students who did so well!

The national results are available on the Mathematical Association of America website (spoiler alert — Harvard won). 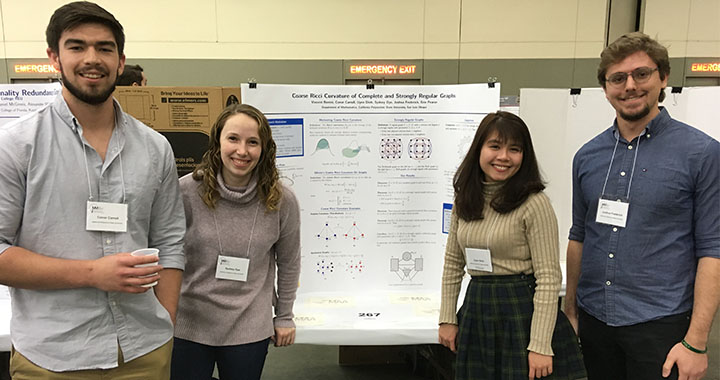 Erin Pearse and Vince Bonini supervised a student research team in the Faculty and Undergraduate Research Student Teams program at CSU Fresno during summer 2018. The team continued to work together during fall quarter at Cal Poly. The students received an outstanding poster award for their presentation at the Mathematical Association of America (MAA) student poster session at the 2019 Joint Mathematics Meetings. They are also working on a paper titled Coarse Ricci Curvature of Complete and Strongly Regular Graphs.

The research was supported by the National Science Foundation and the Frost Fund.

Elliptic curves are a deep area of mathematics with many surprising applications to real life, including cryptography and prime factorization. Pell conics are a special type of conic curve, such as a unit circle. They are the less studied little brother of elliptic curves, with many of the same properties and applications. Our work focused on describing the group structure of pell conics over various rings, and the adaptation to pell conics of some well-known elliptic curve encryption and prime factorization algorithms. This work — titled Curves, Conics and Cryptography — was presented as a poster at the MAA meeting in February.

Chad Collins, Surabhi Agrawal and Julissa Magana worked on a summer project titled Examining Students' Perspectives on Analogies in Abstract Algebra. This research was an extension of Magana and Collins' senior project, as well as independent work that Collins started in winter 2018. The team collected data on and studied students’ use of analogies in making sense of new and difficult Math 481 material, and ultimately extended their findings to describe analogy types, design curricular activities and implications that could use analogies, and more.

Joelle Saute and Kathryn Voltmer worked on a summer research project titled Group Effectiveness and Questioning Processes in an IBL (Inquiry Based Learning) Math Classroom. This research was an extension of Saute’s senior project and her work to gain a more in-depth look at how group effectiveness and group questioning of self and peers may or may not be linked. The initial research was supported by a Cal Poly Baker/Koob grant.

Professors Grundmeier and Retsek with Shannon Cardoza and Tommy Giang

Thanks to support from the Frost Fund, this research group explored readability in the context of mathematical proof. Readability is an essential component of proof writing because a completely valid argument is useless if it is entirely incoherent to the reader. Definitions of readability in a mathematical context, however, are limited and vague.

Our work sought to pinpoint which characteristics of a proof contribute predominantly to its readability, specifically in the setting of introductory proofs courses. Additionally, mathematics education research has shown that proof assessment is a subjective process. Therefore we also sought to investigate the role that readability plays in proof assessment.

The research group worked on a project titled Numerical Ranges of 4 by 4 Nilpotent Matrices. The numerical range $W(A)$ of a matrix $A$ is a convex set in the complex plane. If $A$ is 4 by 4 and nilpotent, then $W(A)$ has at most two line segments on its boundary. This group found families of matrices that show every angle between these line segments is possible. We also found conditions guaranteeing symmetry about given lines through the origin. We used properties of an algebraic curve associated with $W(A)$. Weston and Professor Linda Patton are continuing this work to try to prove some conjectures motivated by our examples. 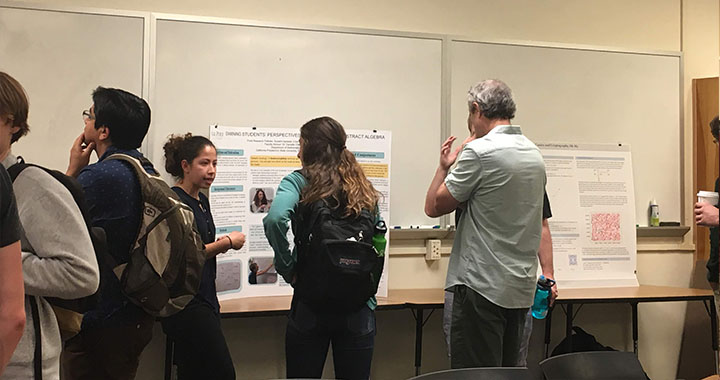 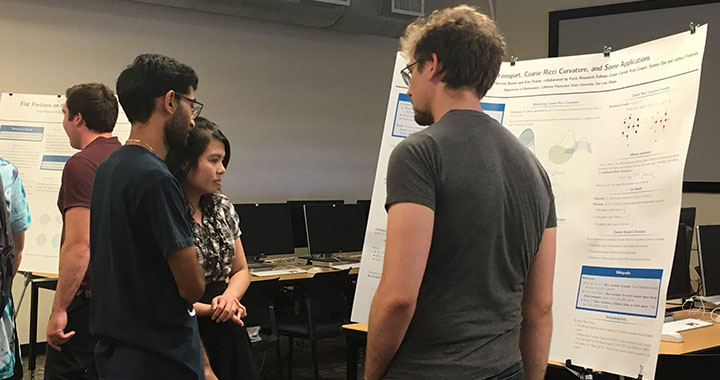